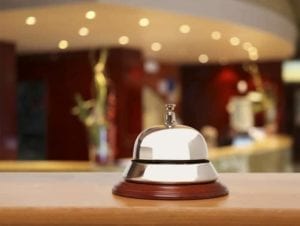 Just when you think you’ve heard it all, someone comes up with something new and, well, it kind of rocks your world a little bit. At least, that’s how I felt when I read the latest news about the “Divorce Hotel.” You check in on Friday married, and, after spending the weekend working with mediators and lawyers, you check out on Sunday divorced (or at least you have all of your divorce papers done and then all you have to do is present them to the court when you get home.) And the best part — its all done for a flat fee, which reportedly ranges from $3,000 – $10,000.


Divorce Hotel was started in the Netherlands by Dutch entrepreneur Jim Halfens after he watched a close friend go through an ugly, expensive, divorce. The experience left him convinced that there had to be a better way to get through the process. So he started doing research and came up with the idea of putting together everything a couple needs to get divorced in one place at one time: the lawyers, the mediators, and the other professionals the couple would need to help them address all of their issues. The couple checks in to a specific hotel (in separate rooms, or not, as the couple chooses). Then everyone comes together in a “mediation suite,” where they work to resolve all of the issues in one weekend.


To date, about 17 couples have reportedly been through the process in the Netherlands. All but one couple came out with divorce papers in hand. Mr. Halfens has also reportedly approached hotels in Britain, Italy and Germany with his idea. Soon, there may be Divorce Hotels all over the world.


Would an idea like this work in America? Well … we’ll see. Mr. Halfens is reportedly in negotiations with several hotels, law firms, and two American production companies to produce (what else?) a reality TV show called Divorce Hotel.


All of this is really interesting, and the idea of going to a “one stop divorce shop” and getting your entire divorce over with in a weekend is certainly appealing. But, would something like this really work for you? At the moment, it doesn’t matter. As far as I know, there are no “divorce hotels” operating in this country … yet. Maybe in the future, there will be. Maybe not. But, what this idea shows is that, if you want to get divorced differently, you have options. You may not be able to get your entire divorce resolved in a single weekend, but, with the right mediator, or team of mediators, and the right lawyers, it may be possible to get through the process in a much more reasonable, cost-effective, and time-efficient manner.


For more information on the Divorce Hotel, check out: http://www.divorcehotel.com/en/