Is a Divorce Guilt Trip Keeping You From Enjoying Your Life?

You can’t eat, you can’t sleep, and on some level, you hate yourself. You can’t stop thinking about how you destroyed your family, ruined your kids’ lives, and caused your entire world to come crashing down. If any of that describes how you’re feeling about yourself these days, chances are you’re on a divorce guilt trip.

When you’re guilty you feel a sense of regret for something you’ve done. Or you may regret NOT DOING something you think you should have done. You can even feel guilty about something that was entirely not your fault and out of your control. (For example, people who have survived tragedies when others around them died often feel survivor’s guilt.)

The key to guilt lies in your belief about what’s right and wrong.

It’s your BELIEF, not your ACTION, that causes guilt.

In the context of divorce then, if you were the one who decided to divorce chances are that you felt (or still feel!) guilty about it. That’s because when you got married you made a promise to stay married “’til death do us part.”

If your marriage is ending, and you’re still alive, you believe you broke your vow. That makes you feel guilty.

And if you believe that your actions caused the divorce (perhaps by having an affair, or “tuning out” of your marriage), then you REALLY feel guilty! That’s often usually when your guilt morphs into shame. 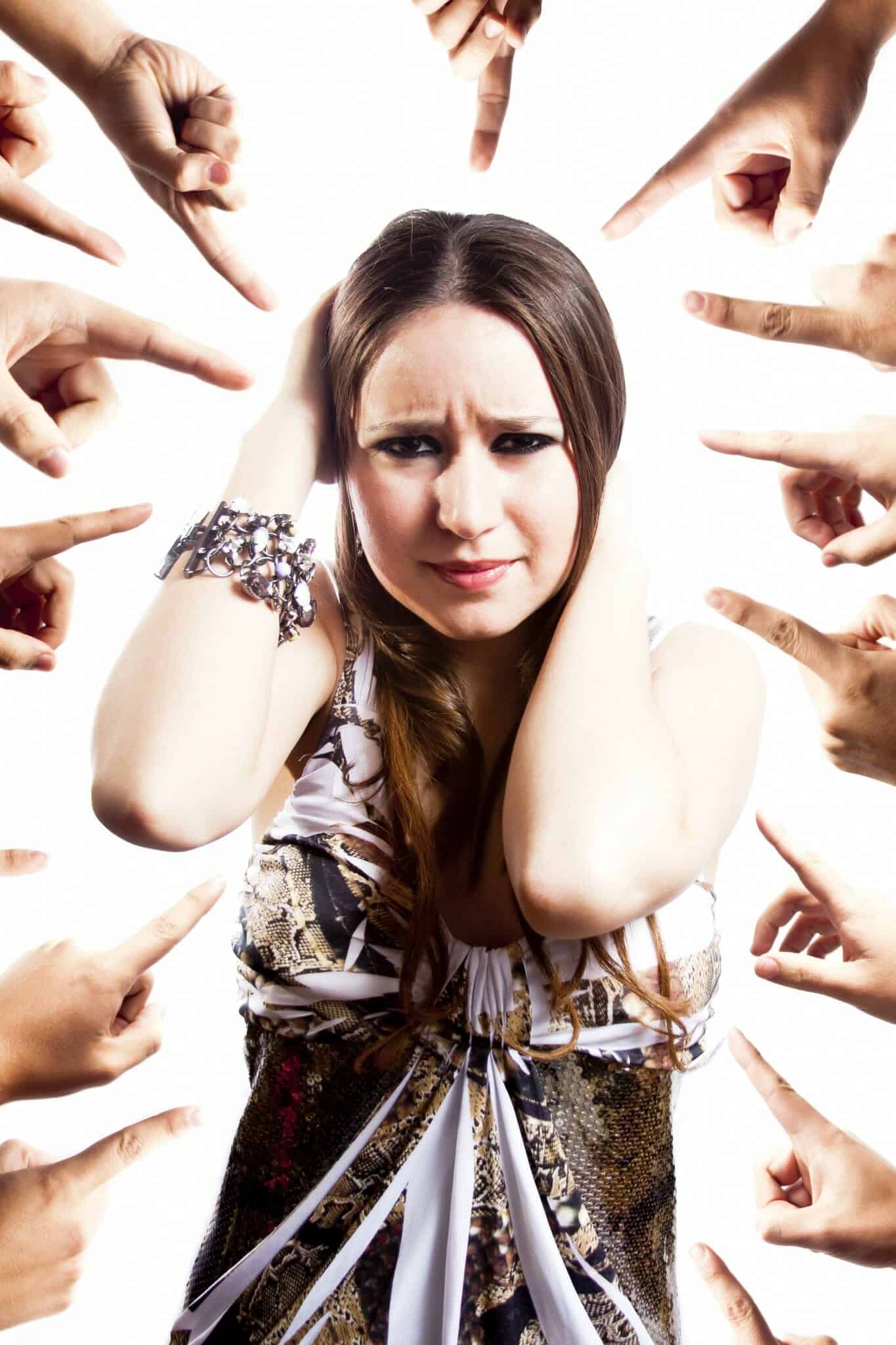 A lot of people confuse guilt with shame. They are not the same thing.

Both guilt and shame are associated with feelings of regret. But the difference is that guilt is the feeling that you DID something wrong.

Shame is the feeling that you ARE wrong.

Shame and guilt often go hand in hand. You may feel ashamed AND guilty about ending your marriage. But the feeling of shame goes so much deeper than guilt.

When you feel shame, you feel like you’re bad, wrong, or unworthy of being loved as a human.

While guilt and shame are both negative emotions, guilt can have an upside.

For example, when you hurt someone or cause a problem that you could have avoided, your guilt may prompt you to make amends. In that sense, guilt is a social regulator. It acts with your conscience and makes you feel bad when you do something you shouldn’t have done.

That kind of guilt isn’t a bad thing.

When your guilt is proportional to your actions, it’s actually healthy.

The problem arises when your guilt is either out-of-proportion to your actions, or when it lasts for way too long. When that happens, or when you feel guilty over something that wasn’t actually your fault and that you couldn’t control, your guilt is unhealthy.

Unlike guilt, however, shame has no upside. There is no such thing as “healthy” shame.

As shame researcher Dr. Brené Brown notes, guilt can be adaptive and helpful. Shame, however, is primarily destructive. What’s more, shame is often a tool your ex uses to put you on a divorce guilt trip.

Guilt trips are a form of coercion or psychological manipulation. They are designed to make you feel bad.

Guilt trips are usually inflicted on you by someone who is using guilt as a weapon to get you to do what s/he wants you to do – or feel bad about yourself for not doing it! The person who’s inflicting the guilt trip generally knows exactly what s/he is doing.

For example, if you’re divorcing a narcissist, you probably have been on the receiving end of more than one guilt trip during your divorce!

Even if you’re not divorcing a narcissist though, your spouse may have tried to put you on a divorce guilt trip anyway. That’s because guilt is commonly used in our society to get people to do what we want them to do. Since divorce rarely brings out the best in anyone, spouses often try to manipulate and hurt each other by “guilting” them both during and after their divorce.

Yet, just because spouses use divorce guilt as a tool to get their way, that doesn’t mean that “guilting” someone is healthy.

The problem is that, in divorce, your spouse and his/her family aren’t the only ones using guilt as a weapon. More times than not YOU are the one who’s putting yourself on a guilt trip by what you believe and what you take on. 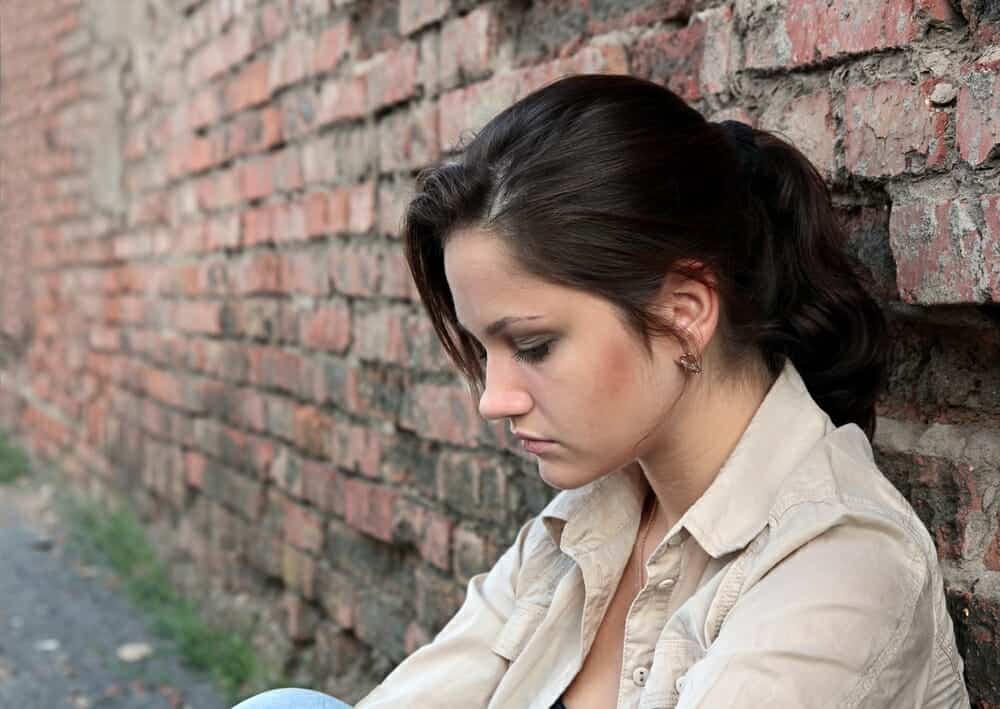 When someone tries to guilt you into doing something, you usually feel it. On some level you KNOW (or at least suspect!) that you’re being manipulated.

What’s worse, because you’re guilting yourself, you feel like everything is “your fault.”

That kind of guilt generally leads to shame. It destroys your sense of self-worth. It makes you feel small.

The trouble is that when you're guilting yourself you may not even realize that YOU are making yourself feel bad! You also don't believe you can change.  You think you're stuck.

That's not to say that dealing with your guilt at the end of your marriage will be easy. If you had an affair, or neglected your marriage for way too long, the guilt you feel over ending your marriage can be crippling.

The same thing can also be true even if you didn’t do anything “wrong.” Sometimes you feel more guilty when you decided to divorce simply because you were tired of being unhappy all the time!

No matter what the cause of your divorce guilt is, the key to dealing with it effectively is to find a way to acknowledge your guilt, then let it go.

Like so many other things in life, though, that’s easier said than done. 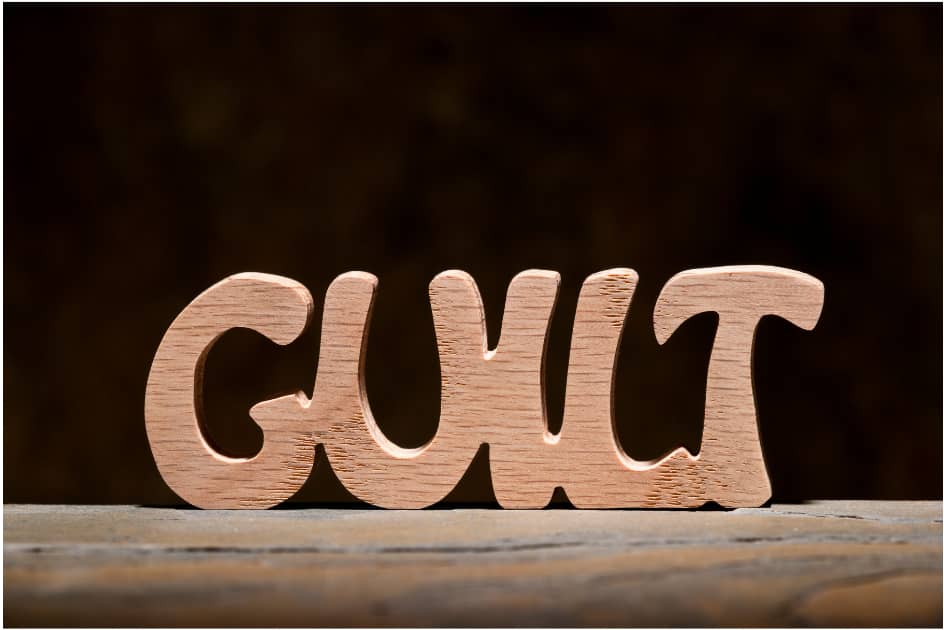 A huge part of the reason we feel guilty in divorce is because we haven’t lived up to our own moral code. We expect ourselves to be perfect.

We all make mistakes! We all do stupid stuff from time to time.

Beating yourself up from now until eternity for making a bad decision or doing something you now regret is NOT helpful! As a matter of fact, putting yourself on that kind of a divorce guilt trip ultimately hurts – not only you – but your kids, your spouse, and every other person you ever get in a relationship with!

Yes, you need to acknowledge your mistakes. Yes, you should learn from your mistakes and not make them again.

But there’s a big difference between using your guilt to improve your behavior in the future and using it to keep you focused on the pain of the past. Keeping yourself in a state of misery and shame will not only destroy your marriage. It will destroy your life.

If your behavior led to the demise of your marriage, take responsibility for what you did!

An effective apology requires you to do four things:

Of all the steps that will help you get off your divorce guilt trip, forgiving yourself is by far the hardest. That’s because we’re all hardest on ourselves.

So, it often helps to do a little role-playing in your head.

Imagine for a moment that YOU weren’t the one who screwed up. Imagine that it was your child, or your parent, or someone you loved deeply who made the mistake that you made.

How would you treat them?

Would you scream at them and embarrass them and go out of your way to make them feel worse? Or would you do your best to treat them with love and compassion no matter what they did or how badly you were hurt?

That’s how you need to treat yourself.

Whether you believe it or not at the moment, you are an amazing and wonderful human being. You deserve to be loved simply because you are human. Period. 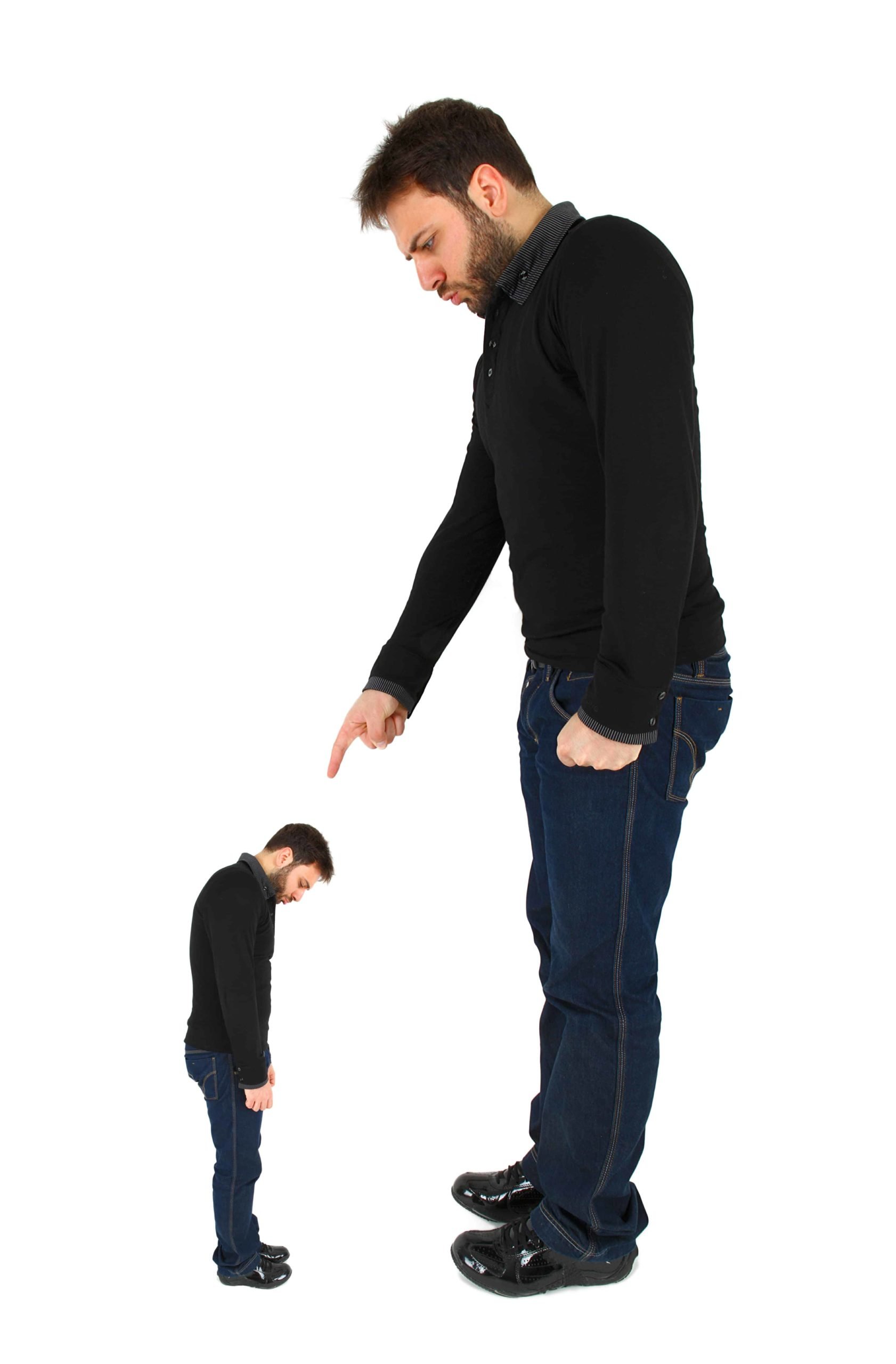 4. Learn from Your Mistakes

Apologizing and forgiving yourself is all well and good. But if you keep repeating the same mistakes, forgiveness is going to become harder and harder.

So, how do you learn from your mistakes?

You start by accepting them. That means doing all the things we’ve already talked about, like admitting you’re human and doing your best to apologize and make amends. It also means being willing to stop obsessing about everything you did wrong and focus instead on what you’re going to do right from now on.

Contrary to what you might think, ruminating over the past won’t help you learn from your mistakes. It will just keep you locked in the pain of the past.

Instead, try to figure out, not only WHAT you did wrong, but WHY you did it. What led you to the point where you are now? IS there something you could have done differently that would have helped you avoid the mistake you made? What will you commit to doing differently in the future?

Asking yourself THOSE kinds of questions will lead you to learn from the past and change your behavior in the future.

Dealing with your emotions isn’t easy. Understanding them and moving past them can be even harder. Working with a good therapist can help you manage your emotions, let go of your pain, and move on with your life.

Sometimes, as humans, we feel SO guilty and SO ashamed of ourselves that dealing with our emotions on our own just isn’t possible. On some level it’s as if we believe that we don’t deserve to feel good. Subconsciously, we’re locked in our own guilt trip and we can’t see how we can ever break free.

A good therapist can gently guide you to explore the places inside that you don’t even know exist right now. S/he can help you manage your emotions, deal with your guilt, and gracefully let it go.

Ultimately, that’s the key to living a happy and healthy life in the future. 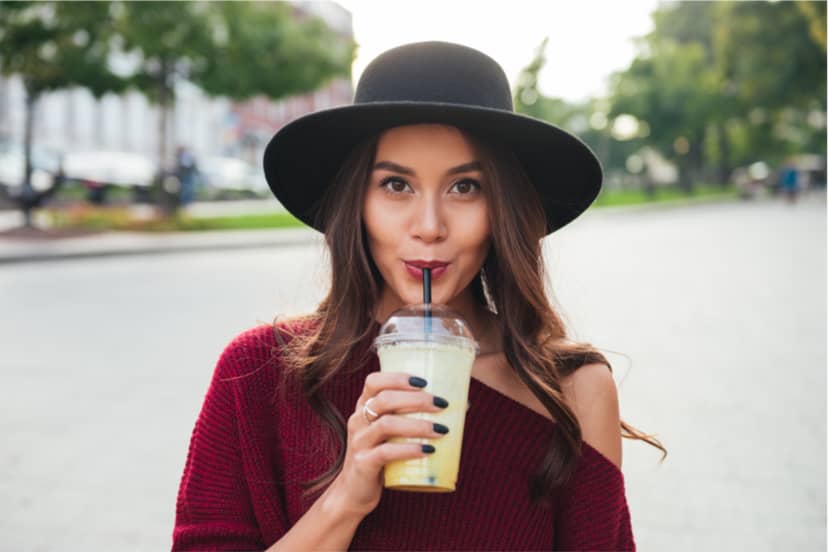 If you do find yourself facing divorce – for whatever reason – and you can learn and grow from the experience, then it’s not ALL bad! (It may not be great. It definitely won’t be fun. But that doesn’t mean it’s a total loss!)

Of course, I don’t mean to imply that getting divorced is always a good thing or that everyone should do it!

The point is that NOTHING is ALWAYS good or ALWAYS bad.

So, give yourself a break. Extend yourself some grace. And go back to tip #1 and remember that you’re human!

Letting Go of Your Guilt

Letting go of your divorce guilt takes time. Like everything else in divorce, it’s a process! It won’t happen overnight.

But it can, and it will, happen, if you are willing to invest the time and energy you need to put your past behind you.

Remember: guilt is a conditioned emotion. We have to learn how to feel guilty.

What we learn, we can un-learn.

So, if you find that your divorce guilt is taking you on a trip to a place you don’t want to go, do yourself a favor. Don’t go along for the ride.